A couple of weeks ago I organised and hosted a talk about “How to adopt a growth mindset in your career & life” at the International Bookstore in Helsinki. I didn’t have a hidden agenda – I simply saw it as an opportunity for training my presentation skills and for sharing my ideas.

I talked about how working in a startup gave me a unique perspective on growth; not only in terms of business but also in personal growth.

3 paths to a growth mindset

I believe that growth simply means progress. You don’t need to get it perfect, you just need to get it going. Based on that idea, I came up with a framework on how to adopt a growth mindset. It consists of three parts:

Especially the last part, Grow on your own terms, struck a chord in me and my audience.

This lesson is a huge one. I personally think that mastering this, that you’re able to define what growth and also success looks like on your terms, can be one of the biggest achievements for yourself, your wellbeing and your mental health.

In all honesty, I haven’t fully mastered it yet. All I know is that I’ve reached a point in my life, where I no longer want other people to define for me what success and growth look like.

Here’s the thing: As soon as you venture into unknown territory, be it a new project, business idea or simply a step further in your personal development, there is one thing that will show up for sure: uncertainty. Unfortunately for us, our brains are wired to avoid uncertainty. Sooner or later, most likely after the initial euphoria of something new has passed, fear wants to prevent us from taking risks.

At this point I shared a personal story about taking risks with my audience:

The day I was diving with sharks

A couple of years ago I went to the Bahamas with my fiancé. He managed to convince me to go on a shark feeding dive. No, not that kind where you’re sitting in a cage and watch the sharks pass by. The kind where you’re in open water and you’re surrounded by dozens of these fascinating creatures.

First, I was really excited: “What an adventure!” Then the dive guide handed me a waiver saying something like: “Sharks are unpredictable animals. You might die. We just want to let you know that it’s not our fault.” It felt like I was signing my death certificate. I got nervous.

We got our gear ready and we drove out to the open sea. After an hour of jumping over high waves and trying not to think about death, we finally arrived at our destination: Shark Arena. Fear was creeping in.

It was chaotic on the boat. While the boat was rocking from side to side because of the waves, people were putting on their gear, checking their cameras and making sure that they have everything ready for the dive of a lifetime. Meanwhile, I was already exhausted by the high waves, the heavy gear and the thought about encountering sharks. I was anxious.

I remember standing at the stern of the boat, waiting for the captain’s signal to jump. I was looking down into the deep blue. I couldn’t see anything, but our instructor told me that there are around 40 sharks waiting for us down there.

I had the choice to jump or not to jump. I could simply take my gear off and go back into the cabin. I can do whatever I want, after all.

Then I heard the signal from the captain. I hesitated for a fraction of a second, but then I jumped.

Diving with 40 sharks is definitely one of the craziest things I’ve ever done, but it also was one of the most incredible experiences ever. The moment I got out from the water I was pumped with adrenaline and I felt like I could conquer the world!

After sharing this story at my talk, I wrapped up the session asking the audience to think about their shark moments. I wanted them to pick the one thing that they are scared of doing and then simply do it.

That evening was amazing. I felt proud and accomplished. I was able to provide value and inspiration and I got great feedback from the audience. Success!

What’s your next shark moment?

The following day I woke up and I knew my life as I know it was over. There were two questions bugging me:

“When was the last time you jumped into uncertainty? What would be a shark moment in your life right now?”

I realised that I was telling and inspiring my audience to do things that scare them, while I’ve been procrastinating for months to do the same.

Here I am, four weeks later.

In the past 5+ years I’ve helped grow Finnish fintech startup Zervant by developing the marketing strategy across continental Europe. I’m eager to share my hard-earned knowledge with other Finnish companies that want to go big in the German-speaking world.

I took the first step towards my new life: I started my own business. I feel anxious at times, but more importantly, I feel that this is exactly the next right step for my personal growth.

Growing on your own terms means to me focusing on the small successes, those seemingly mundane moments where you have to act, despite being afraid.

For me, it’s starting my own business. This is my shark moment… for now.

Enter your email address to subscribe to my CMO Diaries and receive notifications of new posts by email or connect with me on Linkedin.

This article was first published on Linkedin Pulse. 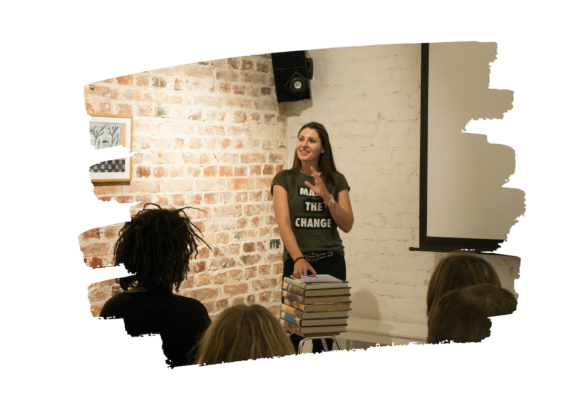